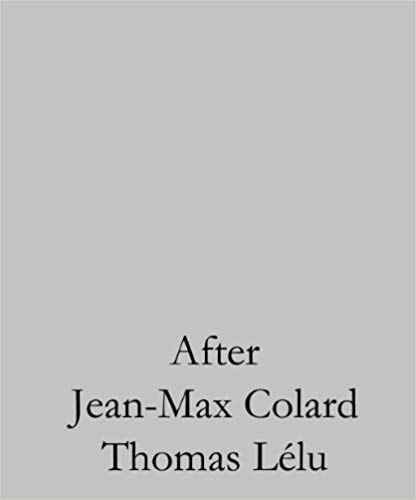 ''After'' constitutes a photographic project on how art affects our perception of reality. Visually expanding on the art world's tendency to see the world through the prism of modern and contemporary art, the book depicts some 200 images of found or researched situations taken ''after'' an artist's work--occupied realities that are, one might say, signed by the artists. ---------- ''After Buren, After Baldessari, After Cézanne, After Warhol, After Bruce Nauman,'' etc. In this project, the editors were ''looking for references, for signs evoking the history of art. And sometimes the opposite: we would take a photo that reminded us of a certain artist. We had fun following that mode for a while, and then, following our conversations, the project became more defined ... '' The title suggests both ''after'' a specific artist, Edouard Manet or Dan Flavin, and ''in the characteristic manner of'': ''It's about showing how our view of the world, our experience of the world, is informed, enriched, sharpened, disturbed, influenced by every work of art that lies in our memory.'' ''After'' then becomes a veritable archive of the editors' recollection of exhibits, art reviews and catalogues. Non-hierarchical, the objects and situations depicted evoke what Raymond Hains once called ''personified abstractions''--Buren's stripes, Niele Toroni's imprints or Carl Andre's sculptures, in whatever form they may be reproduced, will inevitably bring them back to mind. ---------- This full-color illustrated book has been designed by Christophe Brunnquell. It has been co-published by the Villa Arson, Nice, and accompanies the same-titled exhibition. - / Sprache: Englisch, Französisch